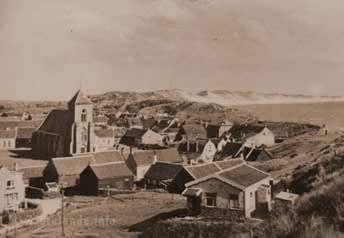 Much like Domburg, Zoutelande was also very popular among Dutch painters around the turn of the century. Zeeland's light is frequently praised by them. The reflections on the water color the skies, seemingly more brilliantly and transparently than anywhere else. 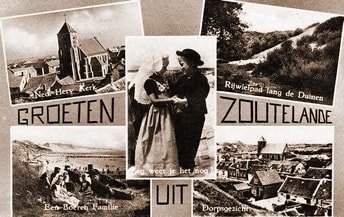 Like almost all the villages, also Zoutelande has its monuments. First of course the Dutch Reformed Church, with a tower which still holds fragments of late 13th-century brick Gothic architecture. Later, around 1500, the church was transformed into hall church by an additional north nave. 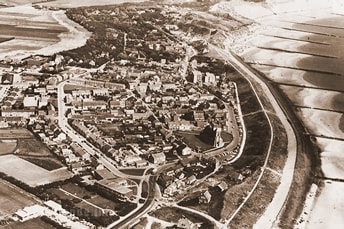 In 1573 it was destroyed by war during the Eighty Years' War. It's suspected that the tower and the church have received their present form around 1738. In 1950, but also more recently, another restoration has taken place. If you walk around the church you will notice that past actuations of the dune sand made the bottom tower section disappear beneath the shifting sands. The Zoutelande parish is legendary associated with the name St. Willibrord. 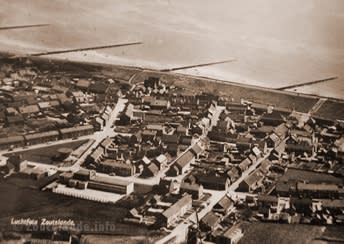 Unfortunately, an ancient landmark, the Willibrordusput (well), was lost due to the construction of the existing seawall. This well, dug by Willibrord, dates from 16th century, according to folkloric tales it provided healing water. Due to erosion of the coast, the well eventually disappeared into the sea. A new one was dug a few times but those disappeared as well, as mentioned before due the reinforcement of the seawall. In order to not lose the whole story, they built a new well in the 80's at the bottom of the dyke, according to old images. Also Zoutelande has its mill. The flour mill, a round stone smock and low sails, dates from 1722.

Zoutelande can be considered one of the neatest seaside resorts. This is perhaps partly thanks to the former SGP-mayor (1921-1959) of Zoutelande, Mr. Kodde. If it was up to him there would be only strongly religious tourists in Zoutelande. In that time, dancing in public places and camping on municipal land was strictly prohibited. Camping behind the houses was allowed. The owners of these homes were held responsible for law and order though. Wearing swimwear was only allowed on the beach, which was also the case for children.

Fortunately for bathers, there have been some changes. But let's just keep it according to Kodde's philosophy: the pursuit of a proper seaside resort, still held in honor, even after so many years!

Tourism now forms the main source of Zoutelande. For good reason Zoutelande is called, together with the beaches of Dishoek and Westkapelle, the Zeeland Rivera, because there aren't many beaches in the Netherlands with a beach facing to the south.

Zoutelande does, and it's not afraid to let you know. It belongs to the most visited beach resort on the Zeeland coast. Entire streets of this small resort are rented annually to an oncoming stream of visitors who like to spend their vacation here. Even agricultural companies profit in the form of mini-campings, the so-called camping on the farm. Bike rentals, beach pavilions, hotels, guest houses, vacation bungalows, cozy terraces, shops and a beautiful boulevard, it's all there in Zoutelande.